Board tile 1 - Check out my junk So I've been doing a good bit of painting recently, but not of Orks exactly... I picked up a modular battle board from Secret Weapon Miniatures (Christmas present got me about halfway there, so eh, why not?)

Most games of 40K are played on a 4'x6' board. Usually it's... a flat board with some pieces of terrain put down on it, hills or forests or ruined buildings (and, more recently, fortifications bristling with guns.) The game shop I went to and, presumably, will go back to in Dallas had one with a kind of volcano paint job in black and red, one that was just flat green, and one that was just sand texture the whole way. Gets the job done, but lacks a certain visual interest.

The shop here has one of these that they just acquired. Interestin' in its own way, but like most Games Workshop terrain, both overpriced and Imperial-centric. Good enough for what it is, don't get me wrong.

Instead, I picked this one. 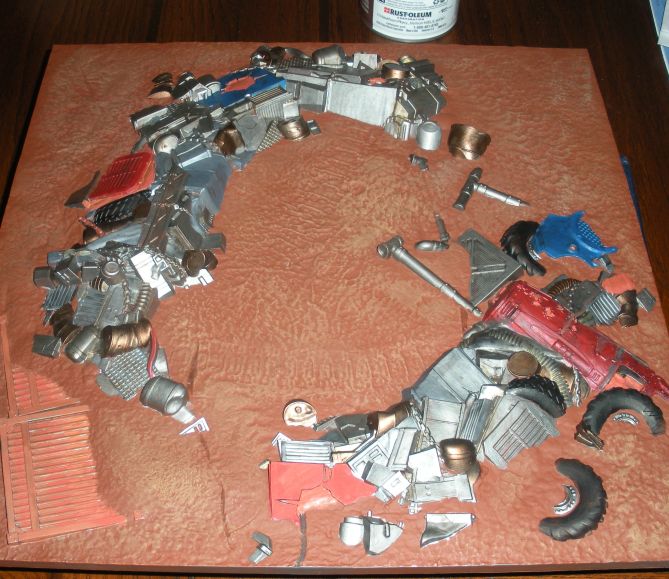 I've got the dirt more or less complete for all 24 tiles, so I picked one with a lot of scrap on it to start messing around with various techniques. Unfortunately the flash on the photo tends to wash out some of the detail, so the wash work doesn't all come in, but a few things look okay...

The rusty crates in the lower left came out really well. That's nothing but silver paint, then rust powder and water. I'm pretty pleased with the brown rust and red rust (both colors from the same place as the board - I've owned 'em for a year but haven't rusted anything in all that time!) The orange powder is, well, quite orange. I used it over the red in a couple of places and the result is quite bright. I think in the future it'll get mixed with some red powder before use and even then maybe only as a highlight on something super-rusty. I also have a "sandy" powder that I haven't tried out yet.

I also have some corrosion paint, which I tried out here and there for rain runoff areas. It's all right - it's another paint with some texture in it so it does "dirty" quite well, but it's also pretty opaque, so it's really only good for really dark-dirty areas. Might work nicely for my ork boots, though, which I've been double-washing with mud and black.

I tried a bit in a couple of the rivulets running off of the scrap pile, but I think it's a bit too much of an effect. Did the same thing with a touch of black wash and that seems to be better at doing "subtle". Might be even better if I try it with a mud wash...

This tile still isn't "done" - I need to go back and put a bit of metal highlighting on the edges and then drybrush the whole scrap pile with that sandy color to help tie it in to the rest. But it's a good start! ...and I have 23 to go, though most aren't quite as scrappy as this one (one is, however, just about nothing BUT scrap.)